ICCT-RESOLVE Network Briefing: Back to the Future: The Historical Roots of Far-right Violence 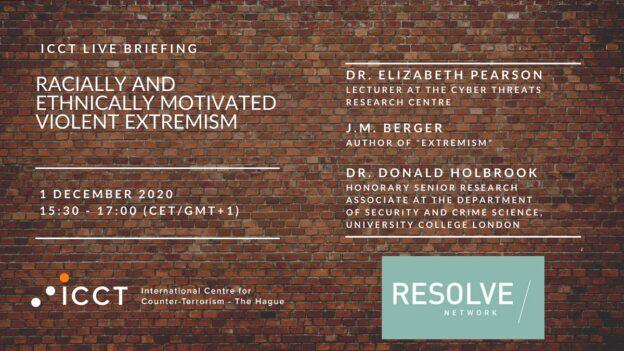 On December 1, 2020, from 930-1100 EST / 1530-1700 CET/GMT +1, the International Centre for Counter Terrorism – The Hague (ICCT) and the RESOLVE Network are co-hosting an online Live Briefing via Zoom, followed by a Q&A session. The Briefing will be about far-right trends, past, present, and future, in Part II of RESOLVE’s fifth annual Global Forum Series. Convened virtually, the 2020 Forum brings together leading experts and researchers in a series of thought-provoking fireside conversations on evolving trends and dynamics in the violent extremist landscape.

Recent years have witnessed the relentless rise of Racially and Ethnically Motivate Violent Extremism (REMVE) across the globe under many forms—from white supremacists to neo-Nazis. Today’s REMVE groups constitute a bewildering diversity of ideologies, objectives, and modus operandi. Yet while many of these groups are new, the roots of the ideologies they espouse and the violence they support and carry out span back decades and even centuries. To understand the current threat posed by REMVE, we must also understand the past histories from which these groups have emerged.

In this online conversation, leading experts JM Berger, Donald Holbrook, and Elizabeth Pearson, seek to unpack the roots and modern manifestations of REMVE groups. Exploring how the differing ideologies have emerged and examining the rise of the far-right landscape, global trends, and future trajectories and threats. The conversation will include discussion of some of the key challenges presented by REMVE groups—including the increasingly blurred line between some groups and mainstream far-right political groups—and the implications of these challenges on efforts to address, prevent, and confront far right hate and violence.

Dr. Elizabeth Pearson is a Lecturer at the Cyber Threats Research Centre (CyTReC), specializing in gender, extremism, and how to counter extremism. Elizabeth has an interest in offline and online and their intersections. She has worked with VOX-Pol, the EU’s online extremism research network, conducting research on gender in ISIS-supporting communities on Twitter. She studied for her PhD in War Studies at King’s College London, where she explored gender in both ‘Islamist’ and ‘far-right’ movements in the UK through field research and interviews with activists. Elizabeth is also an Associate Fellow at RUSI and has carried out research for the London-based think tank examining attitudes to both Violent Extremism and Countering Violent Extremism in the UK, France, Germany, the Netherlands and Canada. Before academia, Elizabeth spent more than fifteen years with BBC radio where she worked in production, reporting and feature-making, mainly for BBC Radio Four.

J.M. Berger is the author of Extremism (MIT Press, August 2018). He is a research fellow with VOX-Pol and a PhD candidate at Swansea University’s School of Law, where he studies extremist ideologies. Mr. Berger is an Associate Fellow at ICCT. He is a researcher, analyst and consultant, with a special focus on extremist activities in the U.S. and use of social media. Berger’s work encompasses extremism and terrorism, propaganda, and social media analytical techniques. As a consultant for social media and security companies and government agencies, he has conducted research and training on issues related to homegrown terrorism, online extremism, advanced social media analysis, and countering violent extremism (CVE). Mr. Berger is a member of the RESOLVE Network Research Advisory Council.

Dr. Donald Holbrook is an Honorary Senior Research Associate at the Department of Security and Crime Science, University College London and an Associate Fellow at the International Centre for Counter-Terrorism, The Hague. He is also director of Veritable Analytics, a research consultancy providing analysis for practitioners and policymakers. He was previously a lecturer at the Department of Politics, Philosophy, and Religion at Lancaster University and Senior Research Fellow at the Centre for the Study of Terrorism and Political Violence, University of St Andrews. He has published widely on topics relating to beliefs, ideas, and media in the context of terrorism and political violence, terrorist use of the internet and the terrorist information environment. He has also managed several applied research programs for government agencies and provided training for policymakers and counter-terrorism, law-enforcement and prison service professionals in a variety of different countries and organizations. Dr. Holbrook is a member of the RESOLVE Network Research Advisory Council.

For more on the RESOLVE Network and our work on racially and ethnically motivated violent extremism, check out our publications and follow us on Twitter @resolvenet.