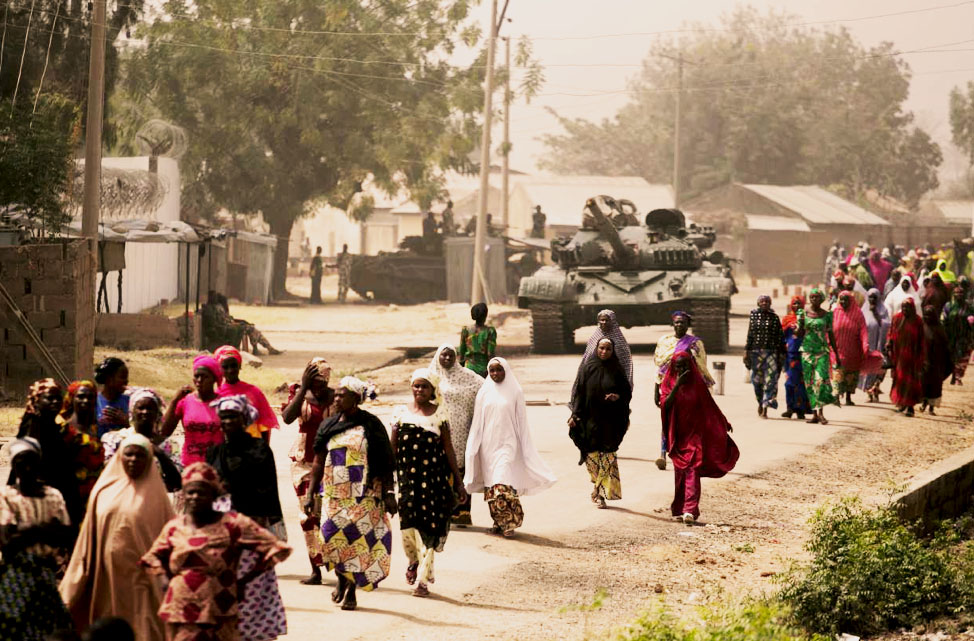 The 60 women filed quietly but assuredly into the ultra-modern 24-Hour Room of the American University of Nigeria, Yola in their hijabs. For nearly all of them, it was their very first time inside a university building. They are some of the most influential women in northeast Nigeria. They signed up to take on the difficult job of pioneering a new initiative to mobilize women in their communities to tackle violent extremism at its roots: the family and community levels.

It was the first day of a three-day training workshop for the new project - Women Action to Combat Violent Extremism and Radicalism in Northeast Nigeria (WACVERN Nigeria). Funded through Nigeria’s North East Regional Initiative (NERI) as part of the USAID-funded Nigeria Regional Transition Initiative, the purpose of the project is to mobilize, train, and deploy influential women leaders from Borno, Adamawa, and Yobe (BAY) states in northeast Nigeria, to identify and mitigate early signs of youth radicalization in their communities. The BAY states have suffered the brunt of the Boko Haram insurgency.

WACVERN has four main objectives. First, it selects, mobilizes and trains influential women from communities that have experienced or encountered the Boko Haram insurgency. Second, the project trains selected women and work with them to develop, test, and deploy a violent extremism risk assessment mechanism that is home grown and easy-to-use. Third, participants are equipped to recruit other women in their communities to work as family counselors. They can use a customized violent extremism risk assessment module to systematically identify youth in their communities vulnerable to radicalization or to joining violent extremist organizations and work with their families to restore them. Finally, WACVERN expands to other communities, using digital tools including Beliepedia, a new mobile app (available in the local Hausa language) that seeks to promote inter-religious dialogue, creating conversations via WhatsApp groups. The women have all been equipped with new smart phones to support their work.

Twenty women from each of the three states were selected from at-risk communities identified through consultations with security agencies and local community leaders, with a focus on communities whose youths had joined Boko Haram1. Local women opinion leaders were selected based on Eric Nisbet’s refinement of Keller and Berry’s engagement model of opinion leadership. The model identifies opinion leaders based on three criteria: social embeddedness, information-giving behaviors, and information-seeking behaviors. Social embeddedness connotes possession of dense social ties, which in turn enables acquisition and dissemination of information within valued social networks. Used in a range of programs to select opinion leaders, the selection methodology intends to ensure that only influential and socially embedded women pioneer the project in their communities. I used the model notably to select influential opinion leaders in South Kivu in the Democratic Republic of Congo.

The prevention approach used in the project is adapted from public health interventions to prevent pandemics. The public health approach has been tried and tested in various contexts to challenge gang violence and to prevent violent extremism. Creative Associates International adopted it in its Ending Terrorism through Youth Service Action Locally (ETTYSAL) program in Tunisia. Various campaigns in the US and in Latin America also used the method.

Step 1: Define the Problem Using Reliable Data: “Who,” “What,” “When,” “where” and “How”. Our first step was to use data and literature to understand the following: 1. When radicalization is more likely to occur 2. Where it is likely to occur. 3. Who is at risk of radicalization, 4. What specifically they are at risk of, 5. How to address the problem based on the four W’s above.

Step 4: Diffuse Prevention Systems and Technologies. The prevention strategy is intentionally developed with the objective of making them “go viral”, using mobile phones and the social media messaging tool, WhatsApp, to reach women in other communities.

Risk assessment systems as part of P/CVE programming or intervention are new and have not been tested in Nigeria or in any other countries of the Lake Chad Region. Women assigned weights for each identified risk factor based on their local knowledge of the gravity each risk factor represented in their communities, aware that lower-level risk factors can coalesce into higher-level risks.

In working with the women within ten different groups to grade risk factors, we found massive variances in the weights that different groups assigned to risks, even among women from similar communities. This suggests that risks could be socially constructed and that there are variations in levels of worry correlated with imagined risks. This implies that worry may not necessarily correlate with actual risks. There may be need for a more nuanced understanding of the social, religious, and cultural processes at play in the way communities construct or become conscious of risks of radicalization. Another implication is that feelings of safety and risks may exist only within social groups and not necessarily as objective conditions that can be generally perceived and encountered.

There is doubtless need for further research to clearly identify not only risk factors and their protective inverses, but also the factors that influence the social construction of violent extremism risks and the ways they manifest locally. This project and future research could lead to the conclusion that violent extremism risks and protective factors are embedded in social structures, and may not be objective conditions that are perceivable, calculable, or even predictable.

Jacob Udo-Udo Jacob is a Visiting Professor of International Studies at Dickinson College, Carlisle, Pennsylvania, USA. Until his visit to Dickinson he was Interim Dean at the School of Arts and Science, and Chair of the Communications & Multimedia Design program at the American University of Nigeria.