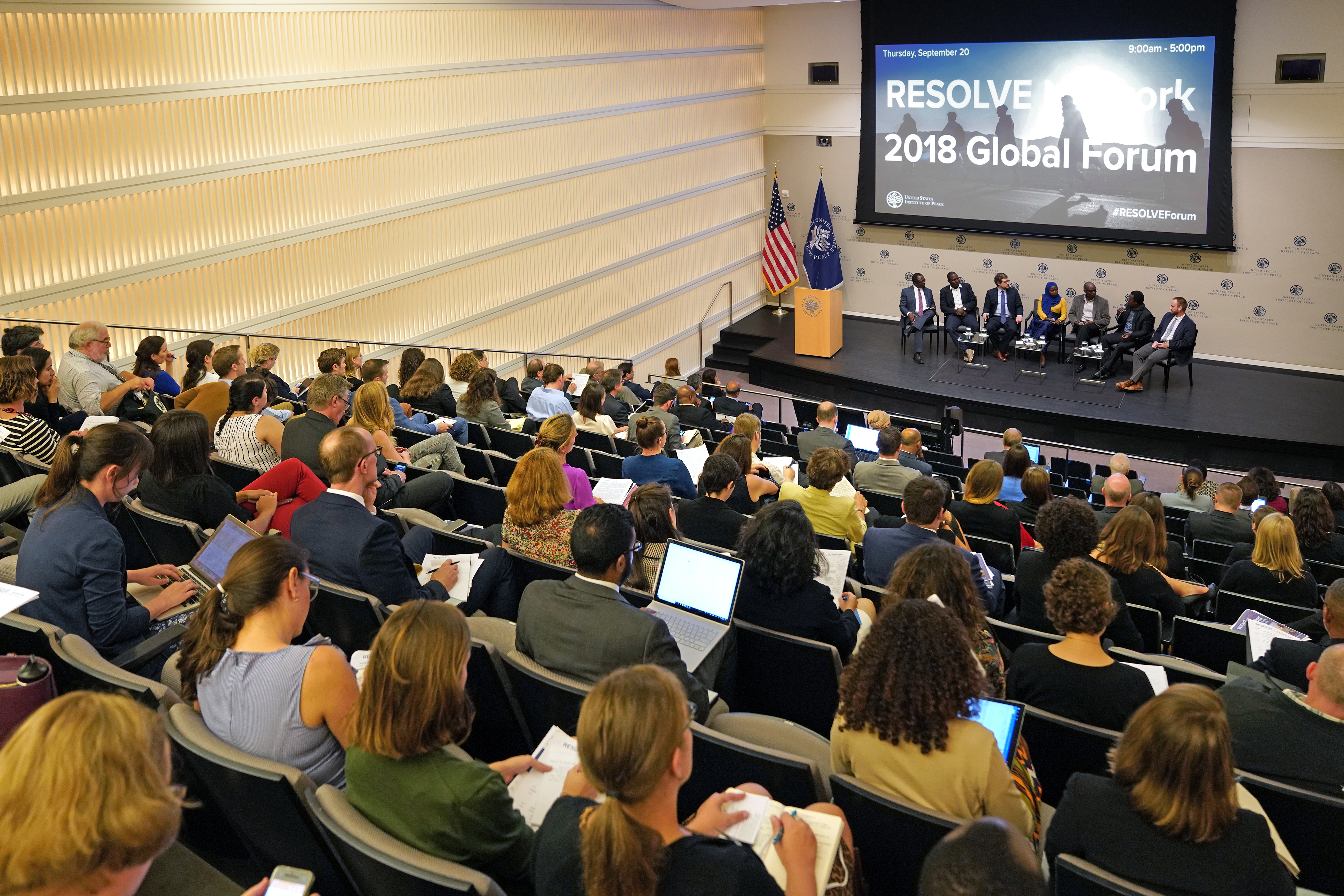 Despite several years since the international community elevated the importance of preventing and countering violent extremism (P/CVE) in policy, research, and practice, the landscape is still unclear. As a policy framework, it has become a key determinant of international foreign assistance in complex and fragile environments around the world, yet in practice, it is unclear if these efforts are producing sizeable or persuasive measures of efficiency or effectiveness. The community of practice, including U.S. government interagency partners, often have more questions than actionable answers when designing P/CVE efforts. As P/CVE in policy and practice commonly borrows from the study of peacebuilding, violence reduction, and conflict resolution, as a research discipline it can be broad and challenging to define. Moreover, because P/CVE is often conflated with counterterrorism, implementing programming initiatives in practice, that are contextually and culturally sensitive, respectful of the community’s vulnerabilities, and do no harm, is a challenging endeavor.

In general, conceptions of violent extremism are still underdeveloped in significant ways. First, we tend to simplify an extremely complex phenomenon into linear causalities and convenient solutions. It is hard to overstate the complex nature of the manifestation, spread, and force of violent extremism. P/CVE needs to find comfort in complexity, ambiguity, uncertainty, and debate, and seek interactive efforts to manage context-specific complex systems instead of devising universal rulebooks. Viewing violent extremism as an isolated, compartmentalized manifestation of grievance limits our ability to understand and support efforts to combat it.

Second, it is imperative that P/CVE practice engage in empirical research to ask better questions; recognize our cognitive limits and biases; and test hypotheses accordingly. The multidisciplinary contributions of behavioral and data science, among others, are indispensable to progress forward in the study of violent extremism. Given the generational character of the terrorist threat, longitudinal observation and sustained investment in research and analysis of hyper-local dynamics, as well as support and capacity building of researchers born of those communities, is critical to improve baseline understanding and availability of nuanced data.

Lastly, violent extremist groups and their supporters are human beings, with human needs – before they join, after they disengage, and even when engaged in violent groups. Individual stories, behavior, identity, and social group dynamics bring powerful substance into the P/CVE discourse and allow us to analyze and understand how various behaviors interact in different situations. Neuroscience and behavioral psychology can better explain the physiological and cognitive drivers, the philosophy, the belonging, the dehumanization, and the chemical neuro-reactions that manifest in association with violent extremism and violent pursuits.

Recognizing this, the 2018 RESOLVE Network Global Forum, held at the U.S. Institute of Peace, aimed to push the boundaries of what it means to understand and work to decrease violent extremism and investigate key concepts that have been absent, underdeveloped, or misunderstood in the P/CVE field. Bringing together policymakers, academics, researchers, and programming practitioners, the Forum is a hub of expertise for professionals in the field of preventing and countering violent extremism and the entry point of multidisciplinary knowledge and innovation into the mainstream. As RESOLVE’s signature event, the Forum elevates the rigor of research, expands the knowledge base of practice, and advances the importance of locally-informed policymaking.

This year, Forum speakers introduced new angles and tools to understand the challenge via short, thought-provoking TED Talk-style presentations and salon-style discussions. Following each session of talks, Forum participants engaged in breakout groups to reflect on what they learned and provide their insights and expertise towards promoting a common P/CVE agenda. A major objective of the Forum was to move past the recognized flaws of the P/CVE framework and engage in new avenues and approaches to understanding the problem set.

Jesse Morton, a former extremist and propagandist of Revolution Muslim, an al-Qaeda affiliated group in New York City, shared his personal story and journey from radicalization to deradicalization, reintegration, and his work combatting hate and extremism today as head of Parallel Networks. Mr. Morton’s account was followed by a deeper look into the psychological and neurological processes that influence human behavior with Mike Niconchuk of Beyond Conflict. Understanding how the brain reacts to stimuli from violent extremists or in contexts where violent extremism has taken root is crucial to understanding individual and social vulnerabilities to violent extremism and how to mitigate them with more constructive, positive activities. Finally, Dr. Chris Meserole of Brookings discussed how machine learning and data science methodologies can unearth how political rhetoric and policymaking in the West proved salient vectors driving foreign fighter recruitment in the Middle East and North Africa.

Following the first session, the RESOLVE Network highlighted preliminary findings from its 2017-18 Lake Chad Basin Research Initiative. RESOLVE Network Lake Chad Basin Research Fellows and Principal Investigators engaged in a nuanced discussion, moderated by RESOLVE Research Advisor Dr. Jacob Udo-Udo Jacob, on findings from their team field studies in Cameroon, Chad, and Nigeria delving into secular and religious dynamics and conflict on campuses in the region. The discussion and their findings challenged assumptions about the drivers and preeminence of violent extremism in the region and illuminated new insights on the nexus between religion and higher education.

In the afternoon, Priyank Mathur, founder of Mythos Labs presented how comedy can be an effective method of counter-messaging to dissuade at-risk individuals from joining violent extremist groups. By using humor as a vehicle to ridicule hypocritical messages of violent extremist groups, Mythos’s videos provoke discussion of the religious teachings and misinterpretations by groups like al-Qaeda and ISIS.  Dr. Emma Heywood, Lecturer in Journalism, Politics and Communication at the University of Sheffield, reminded us that although internet penetration is increasing around the world, and new technologies and methods related to social media have advanced analysis and data collection, the radio remains a powerful tool for communication, community building, and off-site education in rural, isolated, or low-literacy communities. She highlighted radio as an underutilized tool against violent extremism, particularly in fragile contexts. Dr. Pamina Firchow, a former USIP Jennings Randolph Senior Fellow and Professor of Conflict Analysis and Resolution at George Mason University, presented the Everyday Peace Indicators—a measurement system based on hyper-local conceptualizations of peace, built with direct input and collaboration from community members. Lastly, Dr. Maria J. Stephan of the USIP explained how nonviolent action and people power can undermine violent extremist narratives. Although data shows nonviolent movements to be twice as successful as violent struggles, nonviolent action remains an under-explored approach in the P/CVE ecosystem.

From complex systems to meaningful interventions: connecting research to policy

The final salon featured prominent thought leaders of the field: Cheryl Frank from the Institute for Security Studies, Todd Helmus from the RAND Corporation, Matthew Levitt from The Washington Institute for Near East Policy, and Leanne Erdberg of USIP. The salon provided a reflection on the challenges of P/CVE in practice and paved the way for the discipline moving forward. Panelists commented on how integrating research into policy is difficult often by design. Disparity of research and policy communities often results in uncertain research needs for policy priorities on the one hand and not enough research informing policy decision-making processes on the other. Panelists also spoke of the difficulty of maximizing, as habits often dictate, outputs such as production and downloads, but there was recognition that lengthy reports on a website will not suddenly produce influence. Communication and personal outreach must rank in importance beyond publication alone. The panel also talked about failure as P/CVE asks policymakers to take political risks against uncertain results, long programming timeframes, difficulties to measure impact, and competing funding priorities—when particularly in the U.S., failure is unacceptable. The paradox emerged: Why would policymakers, congressional representatives agree to fund research without knowing if it will work? Well we cannot know it works unless we fund it.

When it comes to misconceptions, the panelists discussed how politicians tend to approach the problem from a political-ideological perspective, with a discomfort to implement “social welfare programs” for “terrorists.” Harsh language undermines efficiency and effectiveness on two planes: (1) Terrorism is an emotional term that generates specific political responses which can further exacerbates the problem instead of trying to solve it; (2) Terminology and framing play an equally crucial role for programming on the ground: communities will accept “violence prevention” and “public safety” programs more than ones focused on “terrorism,” particularly when many social ails plague an at-rick community.

Lastly, the panel examined the phenomenon of “PhD fatigue” and the detachment of the DC expert world from realities on the ground. Communities are the best placed to articulate what they need and therefore should be consulted for research. An effective way for external researchers to reconnect with impacted locales is to refer to them with project findings and recommendations for validation and internalization. Often the most helpful approach is to start at the local and state level, with a sustained commitment to rigor and empiricism.

Pete Marocco, Deputy Assistant Secretary and Senior Bureau Official for the State Department’s Bureau of Conflict and Stabilization Operations (CSO) added a positive example during his closing of the Forum, highlighting the Bureau’s commitment to make an impact based on evidence, need, research, and facts. Mr. Marocco emphasized the importance of identifying locally legitimate actors through sensitivity to local context and culture for long-term stability. Successful CVE programming must avoid unintended consequences and exacerbating conflict and must always evaluate for progress. As the day came to a close, Mr. Marocco highlighted that innovation and partnerships with private sector and research organizations in P/CVE are happening, but more work remains to elevate the field for research, training, and evidence-based programming.