Counter-Terrorism & Peace Operations: The Impacts of UN Security Council Approaches to Tackling Terror on the Pursuit of Peace 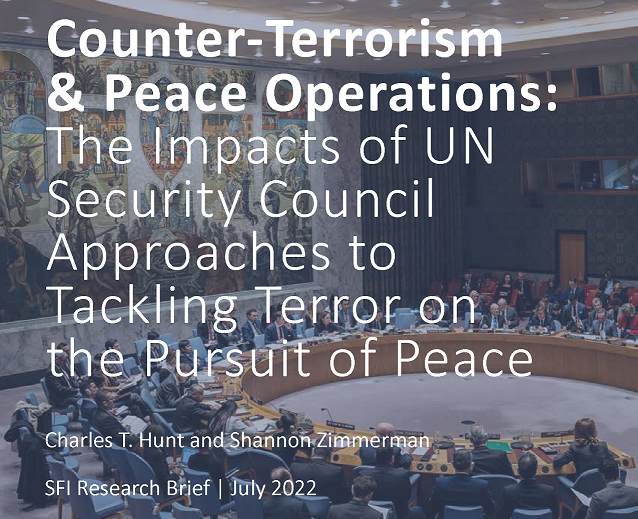 United Nations peace operations are generally considered a poor vehicle for counter-terrorism. Yet, UN peace operations are regularly deployed by the Security Council to settings affected by terrorism and violent extremism. The confluence of terrorism and conflict make this co-existence inevitable, but some missions have also engaged more directly in countering these elements. For example, the UNSC continues to support the mission in Somalia, which actively faces terrorist threats, and has also deployed a peacekeeping mission to Mali amid a jihadist insurgency. At the same time, in places like the Democratic Republic of Congo, peace operations have engaged in offensive military operations that target groups labelled as “terrorists” by their host government partners.

This research brief is the second in a series commissioned by the Securing the Future Initiative (SFI) and published by the RESOLVE Network. SFI is co-led by the Fourth Freedom Forum and The Soufan Center, with funding provided by generous support from the European Union, the German Ministry of Foreign Affairs, the Netherlands Ministry of Foreign Affairs, and the Swiss Federal Department of Foreign Affairs. Launched in September 2021, on the occasion of the twentieth anniversary of the 9/11 attacks, SFI is conducting the first-ever independent review and assessment of the United Nations Security Council’s counterterrorism activities.