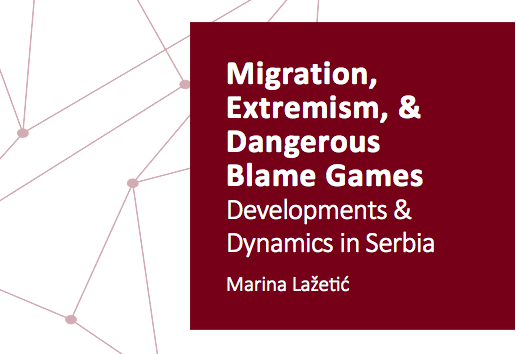 The rapid arrival of hundreds of thousands of migrants into the European Union (EU) from the Middle East, South Asia, and Africa beginning in 2015 coincided with an increase in support for anti-immigrant rhetoric and the far-right in many European countries. A substantial number of these migrants came to the EU through what became known as the “Balkan Route” a major transit land route cutting through the Western Balkans. In 2016, however, the Route officially “closed,” leaving many of those people attempting to reach Europe effectively stranded within the Balkans. In 2020, for example, approximately 7,000 migrants and refugees were present within the borders of Serbia at any given time. This presence of migrants within the Balkans did not go unnoticed and, in some cases, even spurred increased activity within and mobilization among far-right actors opposed to their presence in the region. Exploring this phenomenon, this report focuses on dynamics surrounding migration and responses to it from the far-right in Serbia, one of the countries on the Balkan Route.