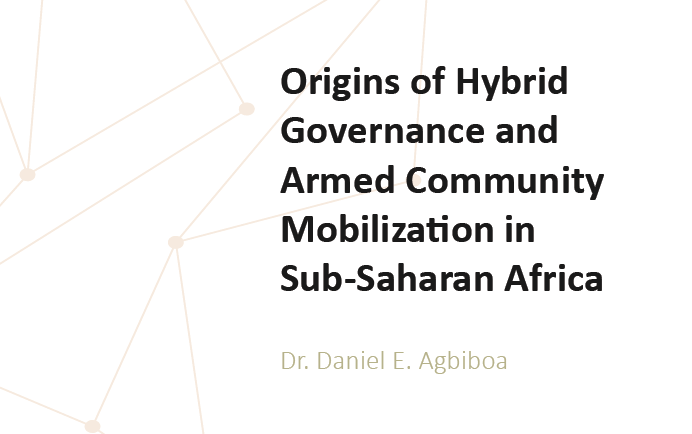 This RESOLVE report, one of three, seeks to understand the origins, dynamics, and drivers of community-based armed groups (CBAGs) in Africa. As an explorative study, this report involves collecting, organizing, and synthesizing available information on non-state security actors and their relationships with local communities and formal state agencies, such as the law enforcement and justice systems. The report builds on the academic literature that explores the relationships between the state and civil society, seeking to challenge simplistic renderings of these as distinctly separate entities with clearly defined boundaries.

Weak or fragile states are ordinarily not in a position to provide security and other public goods on their own. Given their degree of embeddedness within communities and the popular legitimacy that they appear to enjoy, at least in the early phases, CBAGs may be well-placed to carry out basic governance responsibilities, establish public norms of compliance and cooperation with local populations, and provide order and dispute resolution services. This situation forces the research to go beyond the narrative of CBAGs as national security threats and consider their roles as contributors to state-building and peacebuilding. A study of CBAGs—their origins, dynamics, and drivers—could clarify for researchers and practitioners the multiplicity and complex relationships between these groups and the state, as well as their prominent roles and responsibilities in security provision and service delivery. The results of such research, in turn, could support ongoing efforts to improve civil-military relations and to foster a more stable and productive relationship between CBAGs and the state. Insights from this study could also enhance peacebuilding and state-building.