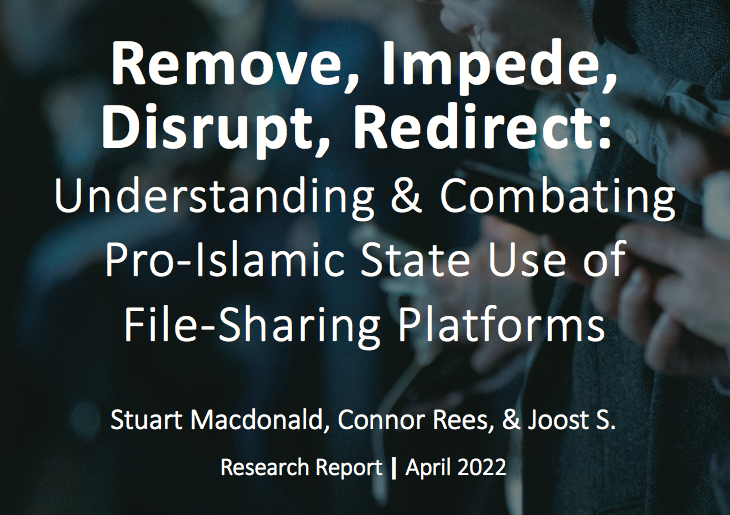 In the face of content takedown and account suspensions on the biggest social media platforms, terrorist groups and their supporters have resorted to the use of file-sharing sites to ensure stable access to their propaganda. Amongst those to have employed this strategy are supporters of the so-called Islamic State (IS). Yet, while studies have repeatedly highlighted the key role that file-sharing platforms play in the dissemination of IS propaganda, there has been little investigation of the strategic considerations that may influence the choice of file-sharing sites from the many available. To address this, this report uses data gathered from 13 public IS Telegram channels over a 45-day period in July - September 2021 to assess three possible strategic considerations: the features offered by different file-sharing sites (such as data storage capacity, maximum upload size, and password file protection); a platform’s enforcement activity; and the ability to generate large banks of URLs quickly and conveniently. Based on these findings, the report proposes a four-pronged strategy to combat the exploitation of file-sharing sites by supporters of IS and other terrorist groups: remove terrorist content at the point of upload; impede the automated generation and dissemination of banks of URLs; disrupt the posting of these URLs on other platforms; and redirect users to other content and support services.

This research was conducted through a secondment scheme hosted at the Cyber Threats Research Centre (CYTREC) at Swansea University. The scheme aimed to create space to form a multi-stakeholder team tasked with looking at the ways terrorist groups exploit the internet and uncover how to respond in a way that respects human rights. The data used to meet this aim came from the Government of Canada-funded, Tech Against Terrorism-created Terrorist Content Analytics Platform (TCAP).

The authors would like to thank HEFCW for funding the secondment scheme via the Research Wales Innovation Fund. The authors also gratefully acknowledge the support received from Tech Against Terrorism, the United Nations Counter-Terrorism Executive Directorate, Moonshot and Swansea University’s Legal Innovation Lab Wales (which is part-funded by the European Regional Development Fund through the Welsh Government).