Towards Local Approaches and Inclusive Peacebuilding in South Sudan 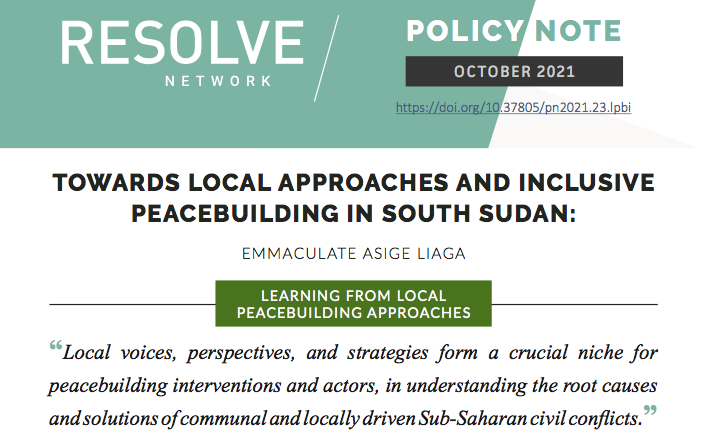 The post-liberation peacebuilding in South Sudan, which largely drew from liberal peace theory, was employed between 2005 (after the signing of the Comprehensive Peace Agreement (CPA) and before the referendum, secession, and independence in 2011) and December 2013 (when it imploded into a civil conflict) and proved insufficient to sustain the fragile peace that briefly existed after the country’s secession from Sudan. After a protracted conflict lasting almost half a decade and the presence of multiple peace actors, the lack of a comprehensive and coordinated peacebuilding strategy proved detrimental. This failure is partly due to poor coordination between stakeholders and lack of local/domestic legitimacy, leading to insufficient peacebuilding and an aggravation of the 2013 conflict.

Over the years, liberal peacebuilding strategies, which emphasize formal institution-building and statebuilding in fragile and conflict-affected environments, continue to produce mixed to poor results and fragile peace. This decline has resulted in the shifting of discourses and operations within peacebuilding, a paradigm shift that pays greater attention to localization and the local context in the conceptualization of peacebuilding objectives and strategies. This transformation promotes local ownership and inclusivity in peace processes and their dividends. The dialogue on inclusive peace has thus gained momentum, bearing a need to fully engage both states and societies in this process. The “local” in peacebuilding forms an important resource when solving root causes of conflicts, as in South Sudan, by improving awareness of the cultural and historical diversity in a given context.